Community solar projects may share the same energy conversion technology as traditional residential, commercial, or utility scale solar, but the process of developing community solar is inherently different. While design demands of traditional solar can be constrained by a single entity, shared solar must accommodate the interests of many, potentially diverse, parties. As a result, community solar presents a collective action problem: individual agents coming together in order to pursue a mutually beneficial goal. Nobel prize laureate Elinor Ostrom famously explored applications of collective action in common pool resources; Ostrom’s work adopts the key assumption collective action is not straight forward to achieve. In other words, a mutually beneficial goal may not be sufficient to cause individuals to see themselves as a group and work towards a joint project. Modern collective action theory is particularly troubling to community solar development because every shared solar project, to some degree, will require independent entities to jointly collaborate, design, and purchase a single solar array.

In some cases, the economic potential of shared solar is significant enough that minimal motivation is necessary for individuals to “solve” the collective action problem and develop a shared solar project. Financial gain to this extent typically requires virtual net-metering (VNM): a practice which allows users to connect their portion of the shared solar array with their household meter. Unfortunately, VNM is limited or completely disallowed by most utilities in the United States. In the absence of VNM, the economic potential of community solar is impaired. In this case, more modest financial returns can prevent independents from achieving a group oriented end. With VNM options available in only a few locations in the country, methods for promoting collective action are integral for the development of community solar.

CSOS as a catalyst for collective action and project development

Community Solar on State (CSOS) represented an innovative attempt by experts to assemble shared solar in a region with restrictive VNM policy and competitive electricity prices. While the CSOS workshop series did not result in the anticipated university-community solar project, it was successful in an exciting new direction. Analysis of the project outcomes suggest that the Community Solar on State model was influential in the development of a local community-led solar project. Remarkably, CSOS acted as a catalyst for collective action which propelled a utility-scale solar array into a region without VNM. The CSOS catalyst model can be refined and applied to any community or network to catalyze collective action and drive shared solar development.

Theories of group agency are instrumental for understanding how the success of the CSOS model is relevant to collective action. List and Petit define an agent in a system as possessing representational, motivational, and capacitive states. The representational state depicts the environment, the motivational state specifies the preferred environment, and capacitive state is the ability to intervene in order to align representational and motivational states. A group agent is then a “group” which exhibits the three qualities of agency. It is useful to visualize shared solar projects through this lens. The community solar group, as a whole, will note the lack of shared solar project in the vicinity (representation), unified by preferring the existence of such a project (motivation), and by some means - financial, regional authority, voting power, etc. - have the ability to achieve this preference (capacity). The establishment of a group agent is an essential component to successful collective action; the independent agents must be able to see themselves as parts of a group in order to appreciate the shared goal and work together.

CSOS was able to initiate collective action by developing the workshop series through the very mechanisms that establish agency (representation, motivation, and capacity). The workshops attempted integrative design: a process which values stakeholders’ opinions and designs the optimal project in compliance with their shared identity. As opposed to starting a project around ideas of concept or system design, integrative design argues that in order to maximize the clients’ solar utility, the development process should commence by aligning the stakeholders’ shared beliefs, philosophies, and principles. 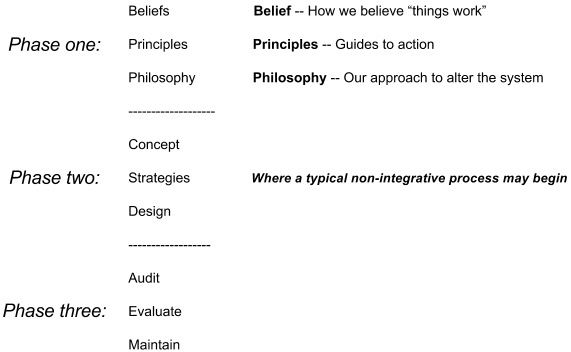 A belief was defined as how one understands the world to work, similar to the representational state of agency. Principles guide stakeholders to action, much like an agent’s motivational state. A philosophy was the role the stakeholder plays within the system, and this can also be represented as capacity: the agent’s ability to alter the system. Recall that representative, motivational, and capacitive states define group agency; CSOS was able to establish a group agent by uniting stakeholders around the fundamental mechanisms of agency. 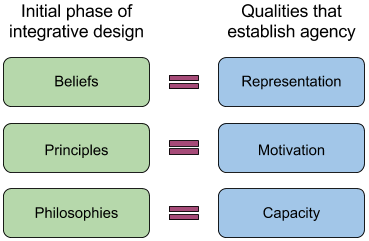 In the aftermath of CSOS, analysis suggests the successful results do not have to be a unique occurrence. The integrative design process practiced through the CSOS workshops is a repeatable framework that can be applied to any region or group of stakeholders. The "community solar onboarding catalyst" can be simplified to the follwoing structure depicted in Figure 5: Integrative design is practiced within a group of stakeholders by the Community Solar on State (CSOS) workshops. A group agent is generated from the workshops, and then determines the optiminal solar project serving the community of represented stakeholders. Finally, the group agent achieves collective action by implementing the solar design.

Figure 5. Progression from Integrative Design to Collective Action through Agency.

By using CSOS-integrative design model, the collective action barrier is mitigated. The catalyst provides an effective onboarding process for stakeholders which allows for (1) more projects to come into existence, (2) develop at a faster pace, and (3) more optimally serive the comnunity of stakeholders. The onboarding catalyst does not seek to alter the beleifs of the community, but instead uses their shared-identity as a strength. Therefore, onboarding through the CSOS model is named a "catalyst" because it facilitates an accelerated product without fundamentally changing the ingredients (Figure 6). 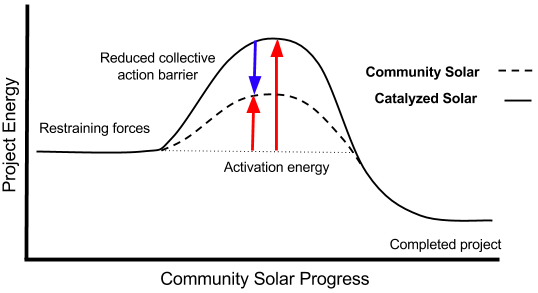